We are Cannock Chase Radio FM serving Staffordshire and it local towns.

Committed to helping the Cannock Chase community and surrounding areas for the last 6 years after opening their doors in 2014, Cannock Chase Radio is a community-focused station welcoming everyone from all walks of life through their doors.

In March 2018 Cannock Chase Radio was awarded an Ofcom FM status making it the areas only licensed gold station which now operates on 3 frequencies; 89.6 FM, 89.8 FM and 94.0 FM including smart devices spanning Cannock, Lichfield, Rugeley, including surrounding towns, villages throughout the county.

With a team of 39 presenters and 49 volunteers, Cannock Chase Radio has built not only an offline community – helping local small businesses and recognising local heroes within the community – but has also built a huge online community reaching on average 1 million + people a week on social media and are now reaching over 1.6 million homes.

Cannock Chase Radio also forges relationships with and not limited to the Cannock Chase police, Lichfield police, Staffordshire police constabularies, Local charities like Catherine Care, Local district councils in Staffordshire as well as local clubs and support groups such as The Lions, Support Staffordshire, and friends of Hednesford Park to name but a few. 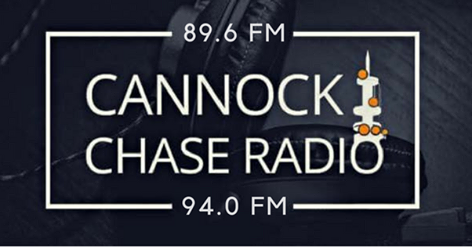